In a review of a Conan graphic novel collection recently I mentioned that the original Marvel comic series was what got me back into comics in the first place. My interest was maintained by a number of other interesting titles of which the main one was the X-men. Now this was the revived X-men as co-created by writer Len Wein and artist Dave Cockcrum. Now while Wein was there for the conception and birth, it was writer Chris Claremont and artist John Byrne (and it would be unfair of me not to mention the outstanding inking/embellishing of Terry Austin) who raised the family to adulthood, or more accurately if metaphorically to dominate the world of comic books. They were also responsible for the character of  Kitty Pryde, a barely adolescent mutant with primarily defensive powers and it was Kitty who, I'd argue, gave the team a wider dynamic which was behind their growing popularity from minor to cult to cultural domination.

In the above panel, note 3rd from right the hairy version of Hank McCoy aka The Beast. Now originally Hank looked completely human until writer Steven Englehart, in what would become known as a mini-series in one of Marvel's tryout titles, transformed him into something like a wolf-man type Beast. He became less monstrous quite quickly and later joined the Avengers where he found himself to be attractive to women.
Hank is probably my favourite Marvel character. He's a super-intelligent scientist, wise-cracking in battle, wryly witty when not, self-effacing and emotionally vulnerable with a very big heart. He's one of the few superheroes that you feel you would actually enjoy meeting if he existed. His range means he can be used in a variety of situations without ever being untrue to the character; he can be the powerhouse, the conscience, the light relief, and even the romantic as he's very cultured. 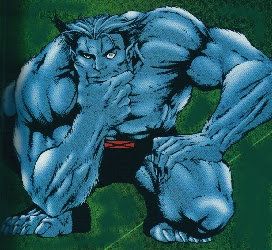 And then there's Kelsey Grammer as Hank McCoy in the third X-Men movie, God help us.

So Hank McCoy muddled along as a likeable all-purpose in a multitude of Marvel comics in varying groups or as a guest star and always returning to the X-men for the next 25 years or so until Grant Morrison came along.
Morrison's intent, aided by superstar artist and pseudonym Frank Quitely, was to revive and transform the X-Men to give them a firm foundation in the new millenium. Which he, to a large extent, did. Which Marvel then pretty much ignored as they felt like it and Morrison signed with DC. There's no doubt it was an interesting series full of twists and turns and surprises and it was certainly the best X-Men or New X-Men as Morrison insisted on it being titled, for many a year.

One thing he did was to emphasise the Beast's mutating physique by giving him feline features and reducing the number of fingers on his what has almost become paws. Hank's character remained pretty much unchanged; he just got better dialogue courtesy of GM.
When Morrison's reign was over I simply stopped reading the X-Men again. I'm not really a Marvel fan and these days I tend to buy a title on the basis of the writer or writer/artist team and even then I'm selective. I started up again with a title which was, as they say, a no-brainer: Joss Whedon and John Cassady.
Joss Whedon, the brains behind Buffy the Vampire Slayer, Angel, Firefly, co-screenplay writer of Toy Story and sole writer of Alien: Resurrection (and a much underrated movie that one is too). Simply: a deity among men. And was to write a 24-issue maxi-series, later published in four trade paperbacks (which I own), and then in one single massive de luxe hardback volume (which is winging its way to me from Amazon even as I write so obviously I'm not going to say it's crap).
And John Cassady. Well just look at this comic book art.

And then: The Astonishing X-Men

Whedon simply wrote a great story with terrific dialogue which encompassed everything which makes a story good: high adventure, romance, tragedy, humour, philosophy, and probably anything else you can think of.
He brought back Kitty Pryde as mature young woman in her early twenties and Peter Rasputin (aka Colossus who'd apparently been dead for years -which I didn't even know- but, like I said, I only get these titles when they're likely to be too good not to) who was Kitty's teenage crush with the result that they finally get it on and Wolverine laconically observes, "About time."

Whedon also brings to centre stage an antagonistic character called Abigail Brand boss of the acronym SWORD which is an organisation operating as a defence from/interface with aliens and operates from a space station and appears to be working with the alien villain of the series. He also adds an innovative twist by revealing that Kitty's alien pet mini-dragon Lockheed is highly intelligent and has recently been spying on the X-Men for SWORD. 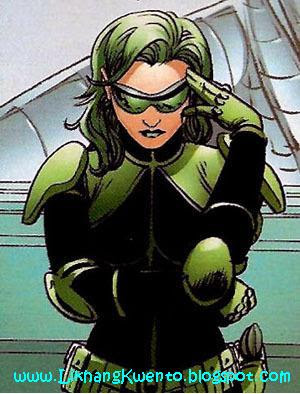 Brand turns out to be alien on her father's side and gets a few scenes with Hank McCoy resulting in her declaring to him, and much to his surprise, that "(I am) so frikking hot for you."

Their relationship is still ongoing, albeit off-screen, in the next, less successful and still ongoing,  series of Astonishing X-Men written by Warren Ellis and confusingly illustrated by the Italian Simone Bianchi.
More fun is the spin-off series. What follows is my Amazon review of-

X-Men: S.W.O.R.D. - No Time To Breathe TPB (Paperback): rating 3 stars
This has been published under the X-men banner but the link is somewhat tenuous as it only features one bona fide X-man in the furry and loveable form of Hank McCoy aka Beast. Stretching a point and you could include Lockheed who was once thought of as Kitty Pryde's pet mini-dragon but who was recently revealed as an intelligent alien with his own (still unrevealed) agenda.

More of a grumble is the physical portrayal of Hank McCoy who I ought to state is my favourite Marvel character. His appearance has changed often over the years from pure (extremely well muscled and agile) human to human with blue fur and more recently into human with feline features and paws. And then again in this story where he has been given a horse-like muzzle which is considerably at variance with his features on the cover, and also much less appealing. That it makes him resemble (as we find out when we meet Abigail Brand's half-brother) his girlfriend's father's species still doesn't justify it.

Okay, as for the story itself, it's set on the space station responsible for defending earth against aliens and is co-lead by the mutually antagonistic Brand and Henry Gyrich (who, as Hank points out about this long-running X-men supporting character, has been wrong about everything for years. There are lots of wheels within wheels but basically Gyrich has SWORD round up every alien on Earth (including superheroes) while Brand and Beast are off fighting Deathshead.

If it hadn't been for the physical portrayal of Hank McCoy, I'd probably have given this 4 stars as it's a fun romp. But that horse-faced appearance is just SO annoying.

And there we have it. The story so far.